The Last Few Weeks in Pictures...

Every day I take picture thinking I am going to blog about the picture... I often never do because life just gets busy. So here is a quick look at some of the things that happened during the last 2 weeks that I wanted to blog about.


Baby Gets a Back Pack 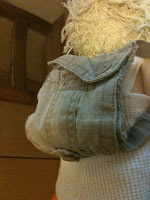 My favorite pans for C Monster ripped at the knees when C Monster took a dive on the side walk.  C monster knees were fine but the pans had a great big hole in them.  He had these since he was 9 months old (We used to roll them a lot).  They were bought at Wall-mart in NB then C Monster had a poopy explosion in the store.

I took one of the pant pockets and transformed it into a backpack for baby.  C Monster was oh so delighted when he saw it. 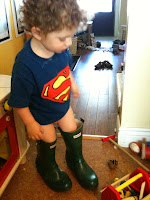 It has been since C Monster was born I was looking for rain boots.  I have thick legs so I have a hard time finding boots that work for me.  I also wanted real rubber boots not some of those boots you can get these days loaded with all sorts of chemicals.  I also wanted something that looked good on me.  I decided almost a year and half ago I wanted low Hunter boots but well they are not cheep - I finely went out and splurged on them.

In the picture to the left  C Monster is modeling them for you.

Canned Eggplant
I finely got around to can eggplant and pistou in oil.  You place raw eggplant with spices and onions in sterilized jars and add lots of olive oil.  Wait one month then enjoy.  I also may pistou with basil from my garden that I also canned.  Once I open these and try them I will let you know how they turned out and post recipes if they were good. 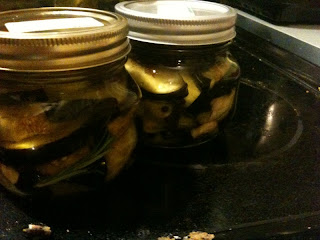 Which Towel is Yours? 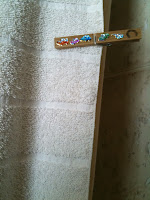 A little while back I blogged about reusing our towels more then once. The problem with this is how do you tell your apart from Geoff's or C Monster's - all our towels are white and match.  I used some clothespins and labeled them with our initial and some identifying stickers. When we hang our towel to dry we add the pin to the side.  Problem solved you always know "which towel is yours" 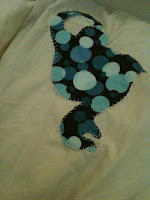 As much as I will be the first to admit I love to shop, I also hate getting rid of something that is 100% still usefull or tossing out something that is broken - because I know no one else would want to use it.

So when C Monster bran new organic sheet ripped only a few months after we bought it I was not ready to down cycle it to something else. I decided to patch it -  I found this extra cute dinosaur patch for only a couple bucks on Etsy and sowed it on to the sheet.  Since the whole was on the side of the sheet I did not need to worry about the treads being uncomfortable under you when you are sleeping.

C Monster quite likes his "new" dinosaur sheets - that is a bonus too.
Posted by Pierrette at 7:55 PM

Hey Pierrette, thanks for the love on the cupcakes.

How did you make the jean backpack? did you follow a pattern or improvise it?

Made it up as I went - it was pretty easy the backpack itself is a pocket from his jeans... just had to add a back and the straps.